The Ulatis Project took six years to plan and formulate and ten years to construct. It involved the widening, deepening, straightening and in some cases realignment of 43.5 miles of natural stream channels to alleviate recurring floods in the Ulatis Watershed. The Ulatis Flood Control Project is located in the Vacaville -Elmira drainage basin.  The watershed area for the Ulatis Flood Control Project ranges from the hills to the northwest of Vacaville to the Liberty Island area in the Delta. The Project was constructed from 1962 to 1972 by the Federal Soil Conservation Service (now the Natural Resource Conservation Service).  After completion of the Ulatis Project, it was turned over to SCWA for operations and maintenance.  The channels are almost entirely on private property with easements granted to SCWA for operations and maintenance access.  The Natural Resource Conservation Service inspects the Ulatis Project on an annual basis and reviews any plans for major modifications or improvements to the Project.  SCWA is responsible for all maintenance and capital improvements.  The total cost of construction was approximately $14 million. 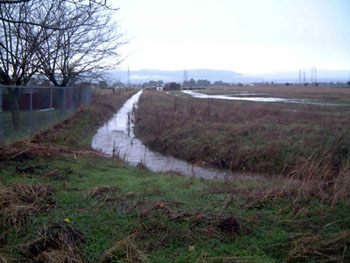 The channels of the Ulatis Project are unlined earth channels where some vegetation is allowed to grow for slope protection.  Trees and woody vegetation are cleared annually to ensure adequate flood control capacity.  The channels are dredged as needed and some plant growth is controlled by chemical herbicides.

Some of the channels of the Ulatis Project are used by Solano Irrigation District and Maine Prairie Water District to convey agricultural irrigation water during the irrigation season.  The two districts install a total of eleven temporary dams in the Ulatis Project channels to store water during the irrigation season.  These dams are removed prior to the rainy season to ensure that the channels can perform their flood control function.

As development in the watershed of the Ulatis Project continues, SCWA must ensure that there is adequate capacity for additional runoff created.  SCWA works closely with the City of Vacaville to ensure that development projects adequately mitigate their storm water runoff impacts.  Part of the long-term maintenance program includes monitoring the channels to ensure that they retain the capacity to carry the flows the Ulatis Project was designed for.

The Ulatis Creek watershed comprise approximately 150 square miles in the northwestern portion of Solano County, California. The Ultatis Creek watershed is located in the Sacramento Valley area where the main economic base is agriculture. Flood protection improvements for the agriculture lands downstream of Vacaville were built in the 1960’s by the Soil Conservation Service (SCS) under the Public Law 566 project (projects). The major creeks located within the watershed are: Ulatis Creek Flood Control Channel, New Alamo Creek Flood Control Channel, Horse Creek, Gibson Canyon Creek, Sweeney Creek, and McCune Creek.  The terrain of the watershed is characterized by mountains and flat valleys. The creek system drains to Cache slough, which outlets into the Sacramento River. The City of Vacaville is the major urban center within the watershed. Since completion of the project in September 1973, growth in the urban center of Vacaville has been more rapid than originally anticipated. Flood problems are intensified in urban areas due to the decreased amount of open space, which decrease watershed infiltration rates and times of concentration. This condition results in increased runoff that must be conveyed by creek channels.

Storm runoff and irrigation tailwater are carried in the streams of the Ulatis Creek system that flow in a general east- southeasterly direction. The improvements consisted of: realigning and widening some existing creek channels; constructing new channels; and building several miles of levees.