Funding of this Program is provided in part by the Division of Boating and Waterways and U.S Bureau of Reclamation.

The contents of this page do not necessarily reflect the views and policies of Division of Boating and Waterways, nor does mention of trade names or commercial products constitute endorsement or recommendation of their use. 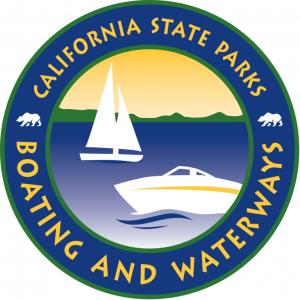 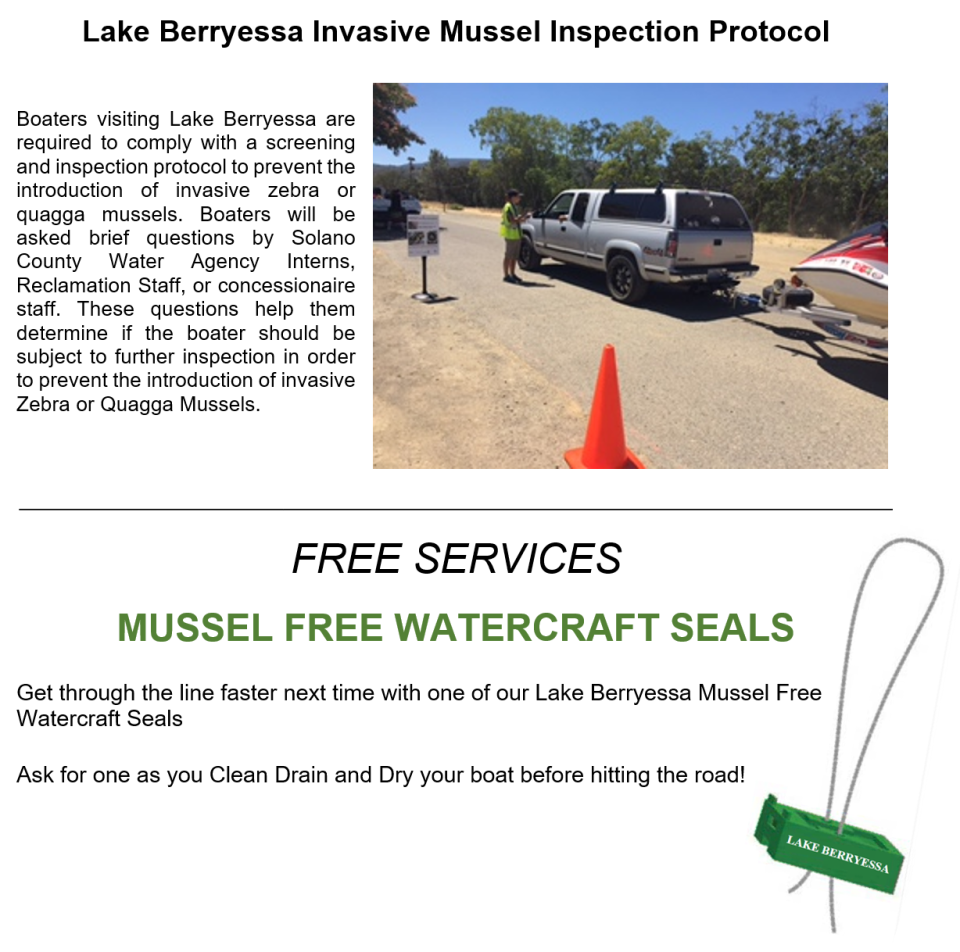 Does Lake Berryessa have mussels?

Lake Berryessa is mussel free! The Asian Clam, which can be found in Lake Berryessa, is commonly mistaken as a zebra or quagga mussel but they do not pose the same threat.

How do you know Lake Berryessa does not have zebra or quagga mussels?

Solano County Water Agency works with a highly skilled biologist who frequently tests the water for physical and biological evidence of both species. CDFW and USBR also conduct test to ensure Lake Berryessa is negative for zebra or quagga mussels.

Why do I have to go through this inspection process?

The best way to keep Lake Berryessa mussel free is to ensure each boat entering the water does not pose a risk of harboring mussels. This is done through the screening questions conducted by Lake Berryessa staff including SCWA Interns, USBR Rangers, and Concessionaire employees.  The green watercraft seals are intended to identify boats who last launched at Lake Berryessa that we know are mussel free, eliminating the need for further questions.

Should I get my boat decontaminated?

Below are indicators you should call to schedule a decontamination: 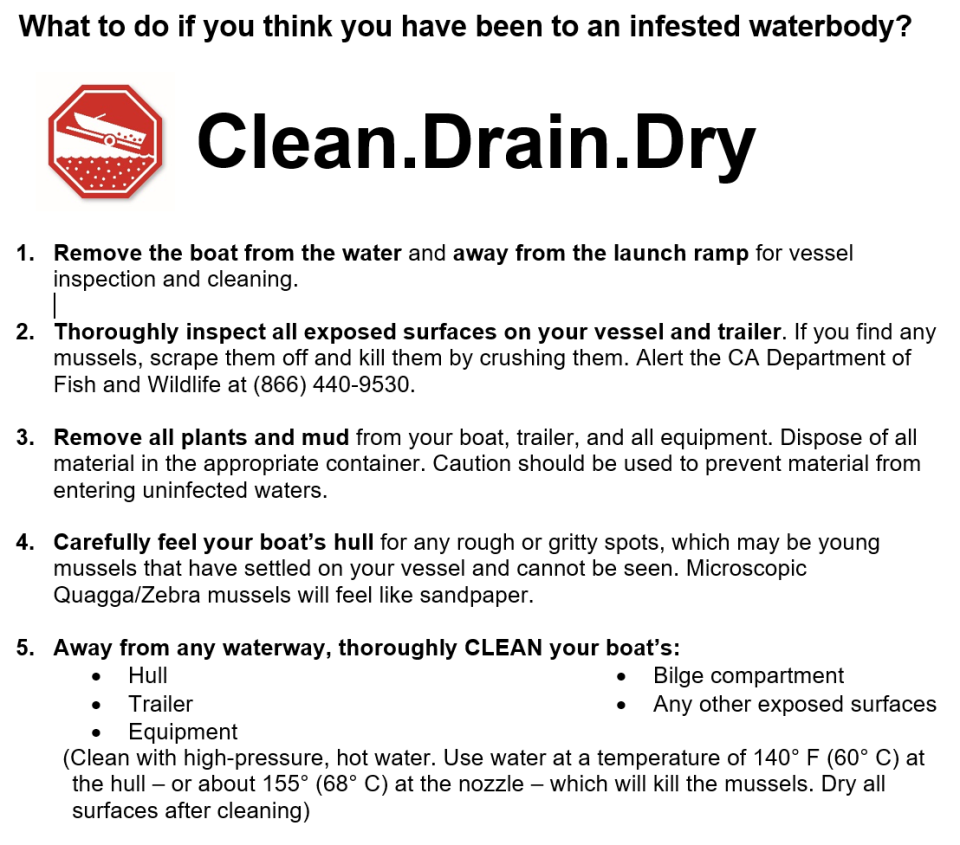 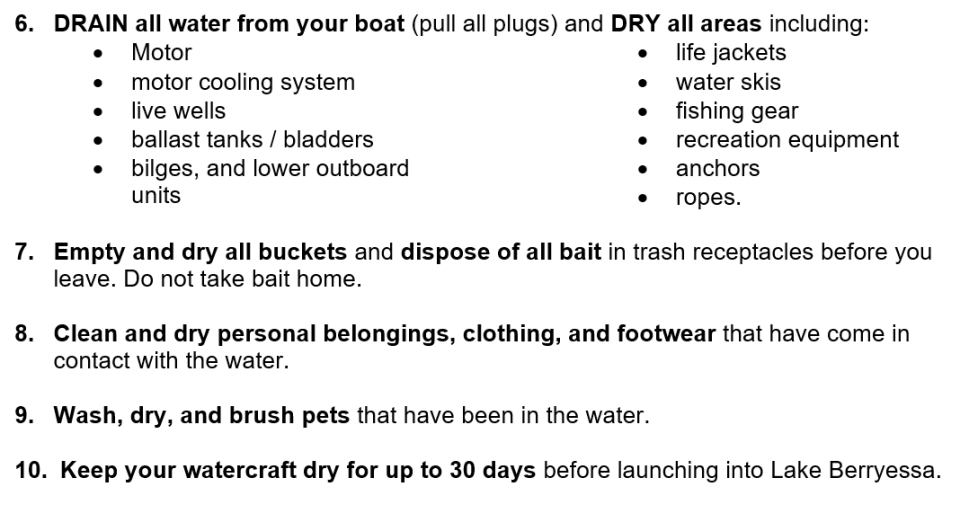 Quagga mussels were discovered in Lake Mead on January 6, 2007.Quagga are an invasive species native to Russia and Ukraine and are thought to have been transported to the Great Lakes region in the ballast water of transoceanic ships.

Quagga mussels were discovered by Metropolitan Water District divers Wednesday, Jan. 17, 2007 at Lake Havasu, and again on Friday, Jan 19, 2007 about 14 miles to the north

Quagga Mussels (Dreissena rostriformis bugensis) are a small freshwater mollusk.  They have some diagnostic features to identify them from zebra mussels.  The quagga’s shell has a rounded angle, a convex ventral, and their color varies from black, white, cream, but they are generally paler (U.S.G.S.). The quagga causes problem because they are “water filterers” and are able to remove large amounts of phytoplankton and suspended particulates from lakes and streams (Sea Grant Michigan). This can have a potential to alter the balance of the aquatic food web.  The mussels’ tissues also trap contaminants, which can be exposed to wildlife if they are eaten.  Like zebra mussels, the quagga also clogs water structures that can reduce pumping capabilities for water treatment (Sea Grant Michigan).

Quagga mussels can grow up to 4 cm. These mussels are indigenous to the Dneiper River drainage of the Ukraine.

Zebra mussels, a native species of Eastern Europe, were first introduced in the United States through ballast water released into the Great Lakes in the late-1980s. Quagga mussels soon followed.

Great efforts have been made to prevent the spread of these fresh water mollusks west of the 100th Meridian. In January 2007, Quagga mussels were discovered in Lake Mead and later in other reservoirs of the Lower Colorado River. In January 2008, Zebra mussels were discovered in San Justo Reservoir in San Benito County, California. The spread of these mussels to additional California waters will seriously impact the state’s aquatic environment and water delivery systems, endangering recreational boating and fishing.

What Makes Zebra and Quagga Mussels So Invasive?

As adult mussels, there are three characteristics that make them incredibly invasive: 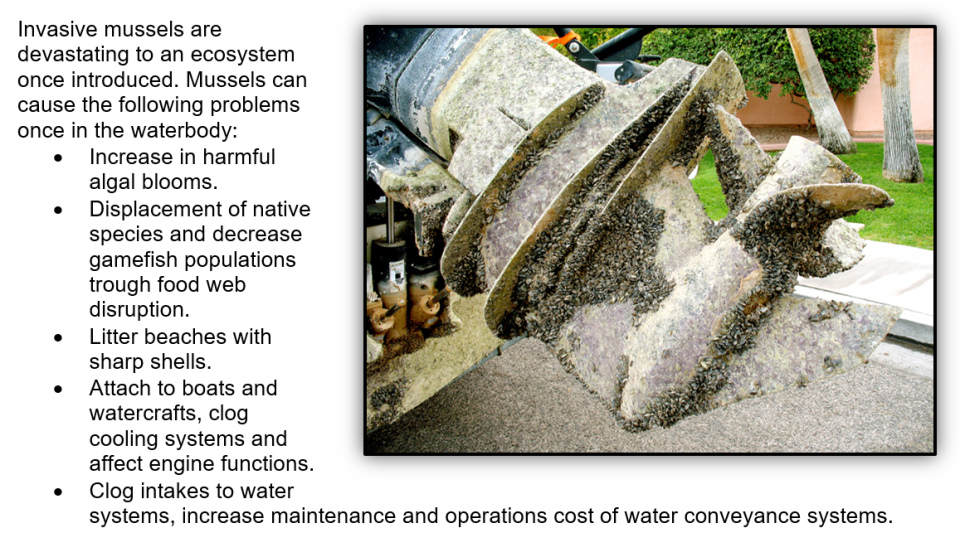