Groundwater is an important water resource in Solano County. Although we have a general understanding of the aquifers, to more fully understand and protect groundwater resources within the County, subsurface characterization of the aquifers and potentially expanded monitoring may be required in the near future. Water supply reliability, quality, and sustainability are overall objectives for the Solano County Water Agency (SCWA) and our Member Agencies, including, but not limited to, the Cities and Irrigation Districts within the County. SCWA and our Member Agencies have developed an Integrated Regional Water Management Plan (IRWMP), participate in two Regional IRWMPs (Bay Area and Westside IRWMPs), and have prepared Groundwater Management Plans to better understand all water resources within the County. SCWA and our Member Agencies have also developed an extensive groundwater-monitoring network.

Solano County overlies portions of two major groundwater basins designated by the California Department of Water Resources. These two basins include a portion of the Sacramento Valley Groundwater Basin, locally known as the Solano Subbasin, and the Fairfield-Suisun Subbasin. There is also a small portion of the Sonoma-Napa Subbasin in the northwestern corner of the County. 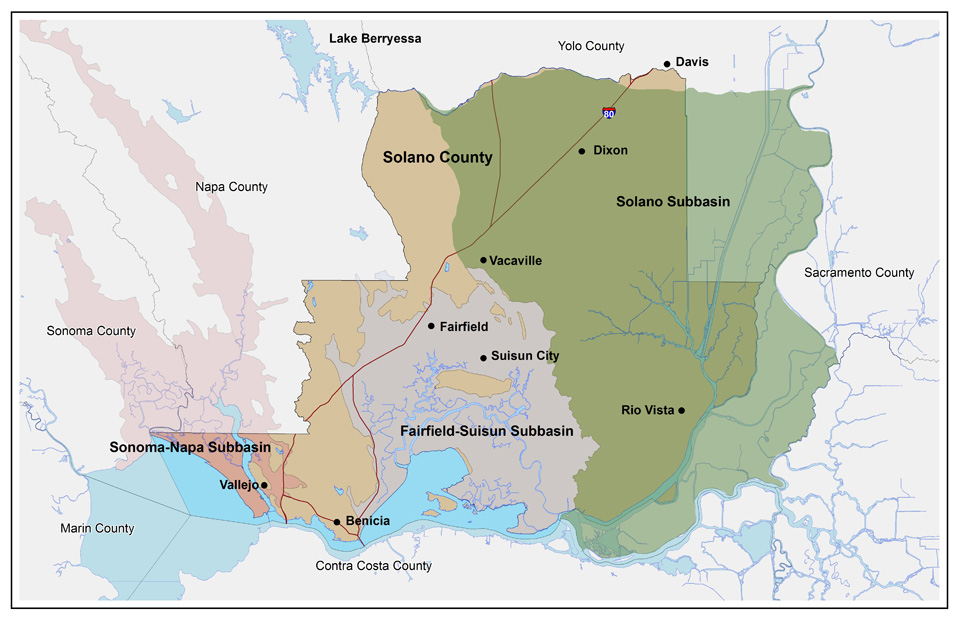 Entities in Solano County that rely on groundwater for all or a portion of their water supply include the Cities of Vacaville, Dixon, and Rio Vista and water districts such as Rural North Vacaville Water District and Solano Irrigation District. Local landowners, ranchers, farmers, and corporate growers also utilize groundwater within the County; however, we do not have data on the extent of their use.

In light of further understanding groundwater conditions within the County, SCWA and Member Agencies have developed an extensive groundwater-monitoring network. The Cities of Vacaville, Dixon, and Rio Vista, Rural North Vacaville Water District, Solano Irrigation District, California Department of Water Resources, U.S. Geologic Society, U.S. Bureau of Reclamation, and Solano County Water Agency have numerous monitoring wells looking at groundwater elevations throughout the County. The data compiled from these monitoring wells goes into a Data Management System (DMS). The DMS contains information from more than 700 wells, with historical groundwater data and more than 63,000 associated water levels dating back to 1923 in some locations. Groundwater elevations in these wells are generally monitored twice a year, in the spring (April) and the fall (October).

A subset of these wells (41) are designated for inclusion in the California Statewide Groundwater Elevation Monitoring Program (CASGEM). See the Water Agency’s CASGEM page for more information.

Groundwater elevations for private wells, for domestic or agricultural use, are not currently collected by any local agency. However, the monitoring network we have in place would show any issues with water elevations in those wells as they are all connected in the Putah Fan aquifer.

In 2012, SCWA installed two continuously monitoring subsidence stations to monitor any changes in land surface elevations due to compaction of groundwater aquifers. These stations are located in Vacaville and Dixon; elevation readings are taken every 15 minutes.

Groundwater conditions in Solano County appear stable. Monitoring shows seasonal changes from spring to fall during the height of agricultural production, and then the aquifer is replenished (i.e., groundwater elevations go back up from direct percolation of rainfall and return flows of applied water by agricultural and municipal users) from fall to spring, when the agricultural season dies down. These seasonal changes and overall stability of groundwater conditions have been observed and documented for the last 50 plus years since the Solano Project started delivering surface water.

Surface elevations from the subsidence stations show very little movement in the 4 years of data collection. The Vacaville station shows movement of the surface elevation of about  +1.6 millimeters, the ground actually went up about ½ of one tenth of an inch. This was likely caused by the large storms we had in December of 2014. The Dixon station shows movement of -4.0 millimeters, the ground went down about one tenth of an inch. This is very little movement over the last four years considering the severe drought conditions California has experienced since 2012.

There have been anecdotal reports of localized issues with groundwater, near Putah Creek and the Dixon Ridge.These are areas where further study is needed.

Although groundwater conditions in Solano County are and have been quite stable for a long time, conditions for most of state are quite different. Many parts of the state have experienced overdrafting of groundwater basins. Statewide, groundwater accounts for 40 percent of the annual water supply, up to 60 percent during dry years. Overdraft and drought conditions caused the Legislature to take a look at regulations for managing groundwater statewide.

In September of 2014, Governor Brown signed several bills related to groundwater management, SB 1168, AB 1739, and SB 1319 which made up the groundwater management legislation package. This led to the Sustainable Groundwater Management Act (SGMA), which became effective on January 1, 2015. SGMA gives local agencies the authorities to manage groundwater in a sustainable manner and allows for limited state intervention when necessary to protect groundwater resources. SGMA requires the creation of groundwater sustainability agencies (GSA) to develop and implement local plans, allowing 20 years to achieve sustainability. SGMA provides a state framework to regulate groundwater for the first time in California history. See the Water Agency’s SGMA page for more information.