Invasive species are alien species whose introduction does or is likely to cause economic or environmental harm or harm to human health. Invasive species represent the second leading cause (habitat loss) of species extinction and loss of biodiversity in aquatic and terrestrial environments worldwide. Alien invasive species occur in all groups of plants and animals. They include competitors, predators, pathogens and parasites. They have invaded almost every type of native ecosystem and have caused hundreds of extinctions.

Some ways to help reduce the spread and introduction of invasive species include: verify that the plants you are buying for your yard or garden are not invasive; when boating, clean your boat thoroughly before transporting it to a different body of water; clean your boots before you hike in a new area to get rid of hitchhiking weed seeds and pathogens; clean your boots and waders before fishing in a new area; and don’t release aquarium fish and plants, live bait or other exotic animals into the wild.

When the Solano Habitat Conservation Plan is adopted, SCWA will develop and implement management programs on reserves and preserves established for the HCP to reduce or control problematic invasive exotic plant and animal species that degrade natural communities and compete with Covered Species. Management programs that will effectively control invasive species will likely entail the use of a variety of management measures including the use of herbicides, livestock grazing, fire, and other best management practices to control/eradicate target weeds and to minimize land use activities that promote weed establishment and spread.

On October 30, 2003, biologist Ken Davis incidentally discovered a population of New Zealand Mud Snails (NZMS), Potamopyrgus antipodarum, in Putah Creek while conducting surveys to catalogue the native aquatic invertebrates of the system. The Putah Creek discovery was the first appearance of the organism west of the Sierra Nevada’s. Since this initial finding, NZMS have been found in the Mokelumne, Calaveras, and Napa Rivers.

Since the initial discovery of NZMS in the Putah Creek inter-dam reach, between Monticello and the Putah Diversion Dams, the snails have spread approximately 6 miles downstream from the epicenter at Fishing Access #3 after sustained high flood flows during the 2003-2004 winter. It is very likely that the limit of infestation has moved farther downstream due to flood flows in Putah Creek during the winter/spring of 2006.

The infested reach includes the intake to the Putah South Canal ( PSC). The PSC is a concrete lined water delivery canal owned by the U.S. Bureau of Reclamation and operated by the Solano County Water Agency (SCWA). The first colonization of the PSC by NZMS was discovered within the first 1.5 miles on March 21, 2005. Further delineation of the geographic limit of spread in the PSC is currently being conducted. SCWA is also conducting chemical treatments in the laboratory, through the California Department of Fish and Game’s Pesticide Investigations Unit to determine if there are ways to control NZMS in the PSC. 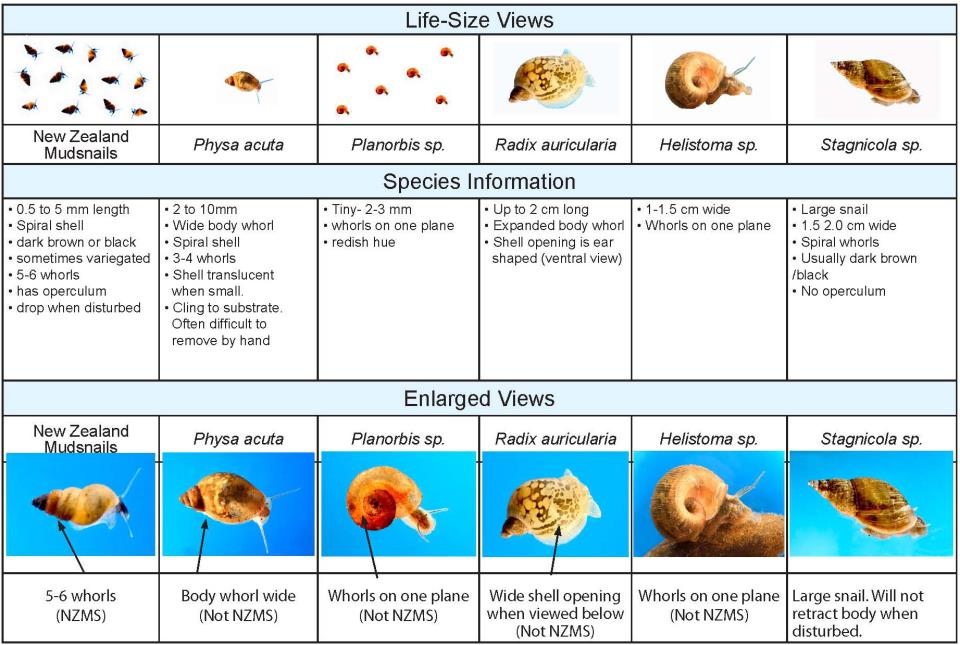 Quagga mussels were discovered in Lake Mead on January 6, 2007.Quagga are an invasive species native to Russia and Ukraine and are thought to have been transported to the Great Lakes region in the ballast water of transoceanic ships.

Quagga mussels were discovered by Metropolitan Water District divers Wednesday, Jan. 17, 2007 at Lake Havasu, and again on Friday, Jan 19, 2007 about 14 miles to the north

Quagga Mussels (Dreissena rostriformis bugensis) are a small freshwater mollusk.  They have some diagnostic features to identify them from zebra mussels.  The quagga’s shell has a rounded angle, a convex ventral, and their color varies from black, white, cream, but they are generally paler (U.S.G.S.). The quagga causes problem because they are “water filterers” and are able to remove large amounts of phytoplankton and suspended particulates from lakes and streams (Sea Grant Michigan). This can have a potential to alter the balance of the aquatic food web.  The mussels’ tissues also trap contaminants, which can be exposed to wildlife if they are eaten.  Like zebra mussels, the quagga also clogs water structures that can reduce pumping capabilities for water treatment (Sea Grant Michigan).

Quagga mussels can grow up to 4 cm. These mussels are indigenous to the Dneiper River drainage of the Ukraine.