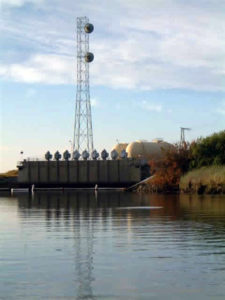 The North Bay Aqueduct (NBA) is part of the State Water Project (SWP). The SWP has rights to water originating from the Sacramento and San Joaquin Rivers, and it stores water in Lake Oroville. The NBA was envisioned as part of the SWP during the 1950s and 1960s when the SWP was being planned. Initial NBA water service in the SCWA service area went to Benicia and Vallejo. In 1990 the North Bay Regional Water Treatment Plant, serving Fairfield and Vacaville, came on line and was able to treat water from the NBA for these two cities. The NBA cost approximately $83 million to construct.

The NBA cannot fully deliver the 175 cfs flow it was designed and contracted for. Pumping tests have shown that the NBA can deliver a maximum of 142 cfs. DWR, SCWA, and Napa County are investigating methods to increase the capacity of the NBA at least to the contract amount of 175 cfs.